Karen Joy Fowler, WE ARE ALL COMPLETELY BESIDE OURSELVES 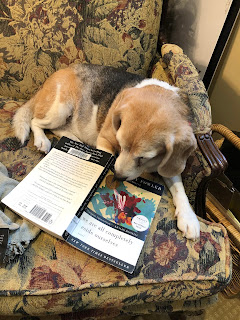 I found this an unusual, curious book. Part family story, part animal rights tale, and a finalist for the Man Booker, its theme concerning the relationship of human beings to their natural environment and other species somewhat reminds me of Lab Girl and Overstory and a few of Kingsolver’s books. The “big reveal” happens around page 70; if you don’t want the spoiler, don’t read on.

[SPOILER ALERT] The story of an odd, academic family (the father is a professor) that adopts and raises a chimpanzee named Fern as one of the three children, it is told from the perspective of the “other” daughter, Rosemary, nearly the same age, so they’re raised as “twins” until Fern and Rosemary are around five years old. When Fern leaves, it wreaks emotional havoc on the entire family, especially the mother, who has a nervous breakdown, and the brother, Lowell, who becomes a fervent animal activist.

There is a piercing clarity to the language; Fowler has the knack of succinct, brutally frank observation and a delicately allusive style, drawing upon everything from Shakespeare plays to Schrodinger’s cat to convey Rosemary’s lived experience. I found myself underlining as I read, especially at the moments when I winced with sympathy or grinned wryly in understanding. One theme is the problematic nature of memory—what we remember and how that memory is overwritten or effaced. But to me, it seemed the large overarching theme is how rules and conventions govern the ways we communicate—including the inevitable failures and purposeful omissions (due to repressive social norms, say) as well as the misunderstandings that stem from talking too much or simply because words and gestures (for chimpanzees as well as humans) are not fixed in meaning. An early example: “One day, a package of junior-sized tampons was left on my bed along with a pamphlet that looked technical and boring, so I didn’t read it. Nothing was ever said to me about the tampons. It was just blind luck I didn’t smoke them.”

Another: [Father] told [his mother] he was running a Markov chain analysis of avoidance conditioning. He cleared his throat. He was going to tell us more. We moved to close off the opportunity. Wheeled like a school of fish, practiced, synchronized. It was beautiful. It was Pavlovian. It was a goddamn dance of avoidance conditioning. “Pass the turkey, Mother,” my uncle Bob said.

Another: No more politics, Grandma Donna had said as a permanent new rule, since we wouldn’t agree to disagree and all of us had access to cutlery.

The secret purposefully withheld from the reader (that Fern is a chimpanzee) is revealed around page 70; our narrator is very aware of the conventions of storytelling, which is (after all) yet another form of communication. An inveterate talker as a child, Rosemary explains that her father (who has tired of her long recitals) advises her to start a tale in the middle. She also leaves holes in the text: “My father made a crude joke … If the joke were witty, I’d include it, but it wasn’t.”

This was a quick, enjoyable read for book club. It is the first book I’ve read by Fowler, but I will look up her others.