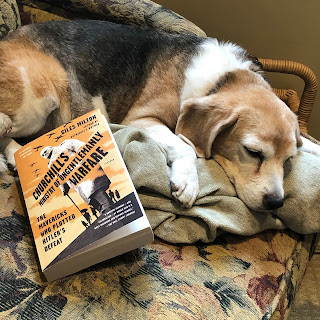 In 1939, Churchill brought together a group of six men whose job was to fight "dirty," as it became clear that guerrilla warfare and innovative weapons might be the only way to beat Hitler. This group of out-of-the-box thinkers used everything from hard candies that dissolved in ocean water to higher mathematics to design bombs and plots that would foil Hitler's plans.

Although at times I felt the book gets bogged down in the bureaucracy of it all (I'd start skimming at the details of who hired whom), there are other places where the book reads like a series of daring, bizarre escapades. My favorite account, toward the end, was about a small group of men who parachuted into Norway to destroy a heavy water plant that Hitler would have used to build an atomic bomb. The fact that they landed in a dense blizzard, then (by sheer luck) literally bumped into a solitary hut that sheltered them for four days until the blizzard ended, confounded Nazi resistance, found their resistance counterparts, scaled a huge cliff, on top of which stood the factory, and managed to set off the bombs and escape without significant injury is ... well, it could be a GREAT movie.

What also fascinated me was that the notion of "(un)gentlemanly warfare" in 1939 was produced discursively, in an argument on the Letters page of the London *Times*. One writer claimed that the sword was the only weapon appropriate for a gentleman, as it gave both fellows a chance and made it a "sporting affair." But--another writer pointed out--did it really matter if one cut the enemy's jugular with a sword or a bayonet? This book spends some time tracing the process by which the English eventually acknowledged that Hitler was no longer playing by rules that governed earlier wars. As I read, I had some compassion for Chamberlain; he didn't want to acknowledge that difference--perhaps because it suggested many other kinds of loss. The very definitions of words such as fairness and justice and decency were changing.

I stole this book from my husband's nightstand after we began watching ATLANTIC CROSSING on PBS. I found this book a good companion to the series, which begins in Norway in 1939 and follows the Crown Princess of Norway to America, where she influences FDR's thoughts and policies on the war. I would recommend to fans of WWII true history and of books such as Eric Larson's THE SPLENDID AND THE VILE.