Charles Finch, WHAT JUST HAPPENED: NOTES ON A LONG YEAR 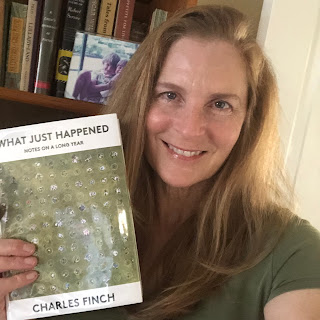 BOOK REVIEW ⭐️⭐️⭐️⭐️⭐️
I had the pleasure of meeting the mystery writer Charles Finch once, when the Poisoned Pen bookstore owner invited me (as another author who writes mysteries about Victorian London) to help interview him. That evening, Finch struck me as gracious, well-read, and comfortable in his own skin. He was on a book tour for The Last Passenger, one of the Charles Lenox mysteries, and I read some of my favorite passages from it aloud to the audience because they were wonderfully, wryly funny -- a tricky thing in murder mysteries. Pulling it off requires that a writer be keenly attuned to both emotions and language.
Perhaps unsurprisingly, Finch has written a memoir that is discursive, literary, allusive, and above all humane. His dated entries beginning on March 11, 2020 follow the linear historical trajectory of events including Covid, the presidential election, and the Black Lives Matter movement, but the entries aren't homogenized into a tidy whole. To me, they feel reassuringly raw and emotionally uneven--reassuring because this is exactly the way that I experienced the past 18 months, with that messy mixture of denial and isolation, anger, bargaining, depression, and acceptance and some hope and a load of anxiety thrown in. If this sounds like Elisabeth Kubler Ross's 5 stages of grief, that's because ... well, it's been a long, painful year.
Some of the reviews on goodreads have criticized Finch for his liberal views, which are earnest and heartfelt and may strike some people as strident. I'll admit, I don't wholly agree with some of the solutions he sketches, as he's addressing some complex problems, but I also felt that what he was capturing (successfully) was the impatience, the desperate longing for things to change *soon* that many of us feel.
As for the writing itself, his feelings and thoughts, his memories and experiences are limned in prose that makes me a tad jealous at his turn of phrase. (The passages about his grandmother are especially tender.) It's the sort of book that makes me want to be a better writer, to be more precise with my own language, not to be lazy, but to find just the right metaphor to reflect human experience in a fresh, true way. He references cultural icons and books (so many books! I found myself thinking, How does he have time to do anything other than read?!) from Aslan to A Tree Grows in Brooklyn, and I came away feeling as though I'd spent several hours with a lively intellect, someone honest, someone I'd like for a friend -- and having been reminded that shared stories and books are some of the nodes around which we can gather, to undo that feeling of isolation and get through this together.
Highly recommended.
Posted by Karen at 1:21 AM