Emily Arsenault, THE LAST THING I TOLD YOU 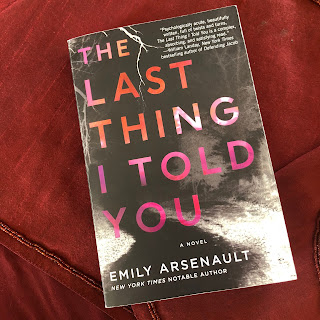 I'll be honest -- I don't tend to gravitate toward thrillers, and I probably wouldn't have picked up this book except that I met the writer at a conference and thought, She's smart and insightful; I bet she's written a good book. And in my opinion, it *is* good, but (reviews including the one by the wonderful Hallie Ephron notwithstanding) I wouldn't categorize this novel as a "thriller." That label sets up expectations of a racing pace that this book doesn't really meet. However, the novel does succeed in excavating a young woman's traumatic childhood, exploring a teenage girl's emotional muddle surrounding a drastic and violent act, and portraying the ensuing multi-layered therapy relationship as well as allowing the reader the vicarious pleasure of solving the murder mystery along with a likable, humane detective. Indeed, in alternating between two narrators--Henry, the detective investigating the therapist Mark Fabian's murder, and Nadine, the traumatized woman who was once Mark Fabian's patient--the book in some ways reproduces the structure of therapy and suggests that in both therapy and detective work, the process toward resolution is the same: assembling a linear and plausible narrative out of scraps.
One of the issues I have with many books that depict therapy is they tend to follow a rather idealized trajectory -- such as in Good Will Hunting, where Robin Williams plays the engaging and wise therapist and Matt Damon plays the young man who reaches the necessary epiphany as a result of their time together, and then drives off into the sunset to find the girl. I'm not griping about Good Will Hunting, which is heartwarming and enjoyable. But Arsenault's book offers something more nuanced: it examines a therapy relationship that feels genuine and authentic, between an imperfect therapist (with emotional fatigue and memory issues) and a patient who does not transcend her demons by the end of their sessions.

For me, Arsenault's strength is her ability to portray the inner workings of Nadine's mind. It's never quite fair to take a passage out of context (it often doesn't "show" well), but I'm going to include one here, just to demonstrate what I mean. This is Nadine: "As a good and proper therapy patient, one tries, most of the time, not to go to these places in one's head. But you do. Your brain wants to do it, just because it knows it's not supposed to. Like when you're in Sunday school class as a kid, and the old lady teaching the class says that God sees and knows everything, even what's in your head, and then your head just keeps thinking I hate Jesus, I hate Jesus, I HATE JESUS! Not because you really hate Jesus (because what is there to hate about long hair and love and crucifixion?) but because God is listening and your brain just wants to screw you over for some reason that you will never--even decades later--ever understand."

There is a raw humanity and a psychological complexity to both Henry (who has his own baggage) and Nadine that I appreciated. For that reason alone, I found myself wanting to see how it all turned out. I'll definitely look for more by this author.
Posted by Karen at 12:22 PM