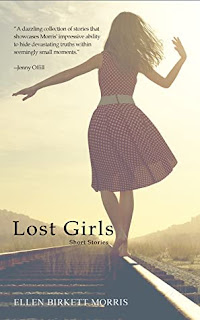 In the first story, a 13-year-old girl is literally “lost” to the world because she is abducted. But in this and the other stories, many interconnected by their setting in the small Southern town of Slocum, girls are metaphorically “lost” because they lose the innocence we associate with girlhood, through the vicious or thoughtless acts of the people around them. This motif runs through these tales, intertwined with themes of teenage anxiety, identity, race, sexuality, aging, parenthood, dependence, violence, and infidelity. Having grown up in the ‘70s and ‘80s, I felt anchored in the period by Morris's adept feathering in of details—the musical Bye, Bye, Birdie, Alice from the Brady Bunch, the Kodak Instamatic with Magicube flash, the TV shows Welcome Back, Kotter and Bewitched, dodge ball, and the horrid blue-and-white striped polyester gym uniforms. I remember them well! Yet I was also intrigued by references to aspects of Southern culture that were wholly unfamiliar to me—e.g., the “bottle tree,” in which empty open bottles hung from branches make sorrowful sounds when the wind blows; and the “sin eater,” a person who sits by a dead body and eats a “corpse cake” to take on the sins of the dead. Morris’s language feels frank and fresh: “She stood on the bar as she swayed from side to side. She was losing her religion—right there in front of everybody.” He had “a cleft in his chin, as if God had picked him special and run a fingernail through his chin before his face was set.” Taken together, the stories in this evocative, often devastating, collection explore a range of women’s experiences, the various losses we suffer privately and collectively, and the ways we sublimate and transcend those losses over time.

Isabel Wilkerson, CASTE: THE ORIGINS OF OUR DISCONTENTS 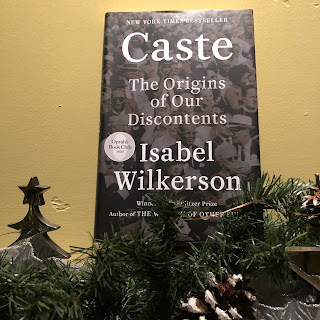 I read Isabel Wilkerson’s THE WARMTH OF OTHER SUNS years ago and was impressed by both its scholarship and accessibility—and surprised and appalled that I knew virtually nothing about the migration of six million blacks within our country. In CASTE, she brings together three caste systems—India, Nazi Germany, and the US—to illuminate the similarities in their underpinnings (eight “pillars of caste”), justifications, and effects. This isn’t an arbitrary yoking together—she makes the telling points that these caste systems are linked historically: both India and the US, fertile and coveted, were at one point both protected by oceans and ruled for a time by the British; and the Nazis based their Final Solution on two books about race and miscegenation written by white, Ivy-League-educated American men—The Menace of the Under-man (1922) by Lothrop Stoddard and The Passing of the Great Race (1916) by Madison Grant. Drawing upon primary sources including slave narratives and secondary scholarly sources, she presents the nuanced idea that in the US, race is a "frontman" for caste. Wilkerson’s 400-page book is well-researched and compelling, and I read it in 3 days, scribbling in the margins as I went. (The theoretical underpinning is solid and accessible; it seems to me Wilkerson leans on theories of discourse and repeated performative acts, such as are described by Michel Foucault and Judith Butler, although she does not credit them.) My one gripe with the book that she employs a wide range of metaphors for caste and its effects: the anthrax released during a heat wave in Siberia, earthquakes, an old house and its mudsill, grammar, the usher in a movie theater, the cast of play (characters, roles, stage), DNA, mineral springs, a ladder, and the sci-fi movie The Matrix. But this is in an effort to bring her points home, and while I found it somewhat distracting, I applaud any strategy that helps convey her important message. I was more affected by her personal stories, as a black woman experiencing caste, which I found appalling and (admittedly) somewhat discouraging. Highly recommend.

Steph Cha, YOUR HOUSE WILL PAY 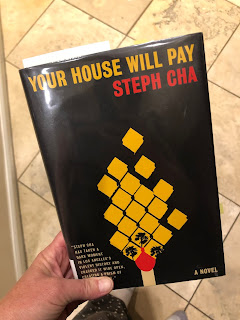 This book takes place in Los Angeles, shifting between 1991 and 2019. Though it is told in third person, the story is presented through alternating subjectivities -- primarily through Grace, the daughter of a Korean woman who committed a crime; and Shawn, whose sister, who is Black, died as a result. Although the action unfolds in a forward arc, this book is not so much a thriller as a nuanced, closely woven tale about how racism, resentment, and violence can be both intoxicating and devastating for a community; how the press and social media can both bring about and undermine justice; and how actions taken by groups can have profound effects upon individuals, who in turn form assumptions about groups. This is a novel in which most of the characters are complex, flawed, struggling, and devoted--either to an ideal or to family or to going straight or to old assumptions. Highly recommend.

Brit Bennett, THE VANISHING HALF 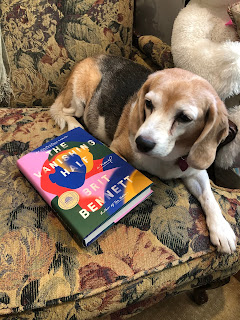 A compelling novel about twins, young black women who are "light enough" to "pass." In the 1950s,  at age 16 and faced with having to quit school to clean houses, they flee their small Deep South town of Mallard (where all the blacks are "light") for New Orleans. There, Stella passes for white, takes a job as a secretary, and marries her white boss. Desiree marries a dark-skinned man and has a dark-skinned daughter named Jude. When the marriage turns abusive, Desiree returns to Mallard with Jude, who is scorned by the light-skinned blacks and who eventually escapes to UCLA by being a track star. If this sounds like a set of double and even triple standards (who's scorning whom), it is. What elevated this to 5 stars for me was that Jude's lover Reese is transsexual, in transition from woman to man. I loved the way this subplot worked delicately to both echo and complicate the theme that identity--whether based in race or gender or any category that is ostensibly "fixed" and (usually) binary--is fluid. These categories are not "natural" in the sense that they have no meaning except for what we've given them; they're cultural constructs put in position to assuage some of the more primitive parts of our psychology--including our fear of the other. Definitely worth the read.
Posted by Karen at 2:05 PM No comments: 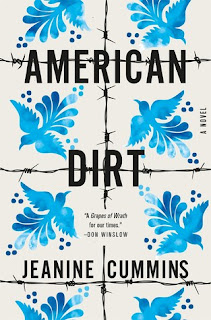 I just spent half an hour reading many of the comments on Goodreads. Clearly this book struck many nerves, and I hear the concerns on both sides. As an author, I believe that if I do my research, humbly and with an open heart, I can come close to inhabiting the subjectivity of--for example--a young, disenfranchised woman in 1870s London whose brother has just been murdered. But inhabiting the consciousness of someone in the present day--particularly someone of a different race or culture, when people are very much living that experience--is a much more challenging endeavor, requiring the most delicate of sensibilities. The conflict I see is that this book is not set up in a way to permit a nuanced exploration of the situation in which Lydia finds herself (being a bookseller in Acapulco, whose husband has written a tell-all on the new drug jefe and has been murdered for it) because fundamentally, this book is one long chase scene. This structure of escalating threats makes it a successful "page-turner"--and indeed, I felt the tension mounting throughout and stayed up much too late reading--but I think that tension comes at the expense of nuance. Still, the fact that the book can stir up such feeling in so many people, and has caused people to generate lists of books I now want to read, tells me it's a productive book. I'm glad I read it, if only to see what everyone's talking about.
Posted by Karen at 7:09 PM No comments: 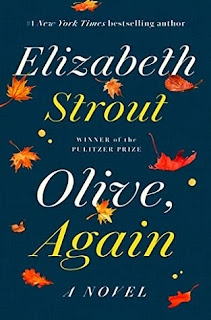 As with the first book of this pair, OLIVE KITTERIDGE, the format is not a typical novel. It's a series of vignettes, all told in third person, centered upon different people in the small town of Crosby, Maine. The outspoken, complex Olive figures in many but not all stories, and perhaps because this form is the same as the first book, I didn't find this book as fresh and original. However, there are elements in Strout's writing that I particularly admire and love. The first is the way she places us in a scene and in a character's subjectivity with extraordinary economy. Here's the first line (which caused me writer envy): "In the early afternoon on a Saturday in June, Jack Kennison put on his sunglasses, got into his sports car with the top down, strapped the seatbelt across his large stomach, and drove to Portland--almost an hour away--to buy a gallon of whiskey rather than bump into Olive Kitteridge at the grocery store here in Crosby, Maine." One sentence and we have place, two people, an intense emotion (wanting to avoid), some insight into Jack's circumstances, and a sense that we are in the hands of an observant, wry, humorous narrator. The second thing I love is that Strout shows us the disparity between two people's interpretations of the same event; that's part of the point of the book, I think, and is enabled by this structure. For example, Jack can't remember the name of a woman he met in the grocery store; Olive saw them together and felt jealous. Third, she doesn't shy away from some of our deepest feelings--shame, love, fear of death, a longing for connection. She homes in on these small moments of belated understanding--when, for example, a character realizes that he had, as a child, accepted the derogatory name "Frenchie" without much thought, but in fact it probably hurt him even then, at some level. And--again, economically--she shows characters at particular pivotal moments, laying bare the uncertainty as they face a new truth. Here's Jack: "What frightened him was how much of his life he had lived without knowing who he was or what he was doing. It caused him to feel an inner trembling, and he could not find the worlds ... there had been a large blindspot directly in front of his eyes. it meant that he did not understand ... how others had perceived him. And it meant that he did not know how to perceive himself." An enjoyable read, full of humor, compassion, and humanity.
Posted by Karen at 2:51 PM No comments: 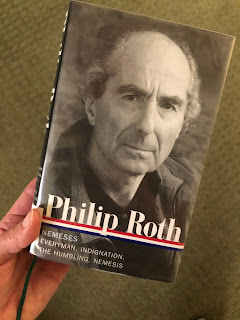 One of Roth's shorter novels, this one is powerful partly because it is timely. In his usual spare, clear prose, Roth explores the uncertainty, fear, anger, and blame that results from a polio epidemic striking Brooklyn in 1944, with all the uncertainty and fear of WWII as a dark echo and backdrop. The novel is focalized primarily through earnest, twenty-three-year-old Cantor, who, even after it's all over, cannot clearly assess his role in it and who bleakly ponders the unanswerable question: how can a benevolent god allow such things to happen? My favorite Roth novel (of those I've read) is THE HUMAN STAIN, but this one felt pertinent and raw.